It is a Medical Physics World

It is my pleasure to announce to you the theme of this year to mark the celebrations of the International Day of Medical Physics (IDMP 2019): It is a Medical Physics World

Aside from being to commemorate the establishment of the IOMP e-Newsletter (eMPW), this theme reflects the fact that many medical physicists (more than 25,000) around the globe are mostly united through their corresponding national societies (around 86) and regional organizations (6) under the umbrella of IOMP.

This unification helps us as medical physicists to enhance our profession for the best interest of our communities and patients everywhere.
I wish all my colleagues around the World a Happy Medical Physics Day.

Enjoy the celebrations of this day by preparing symposiums, parties, contests, gathering, rallies, or any other means to show our pride of being a Medical Physicist! 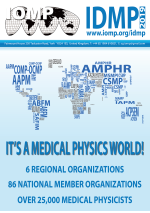 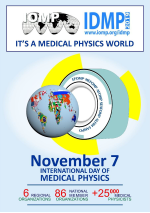 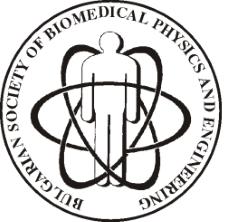 To celebrate the 7th IDMP on 7th November 2019, the Bulgarian Society of Biomedical Physics and Engineering prepared a short video, explaining the roles and responsibilities of medical physicists. The video is also providing information on the availability of equipment and medical physicists in the country.

The video is available at https://youtu.be/zgwuDQ4bZ7s 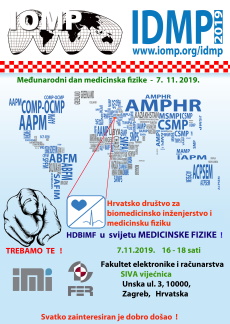 IDMP2019 posters in Croatian and English 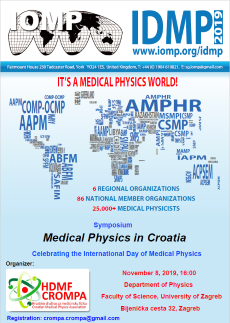 Moreover, related to IDMP there will be also a symposium “Medical Physics in Croatia” on Friday, November 8, 2019, beginning at 4:00 at the University of Zagreb Faculty of Science, Department of Physics in Zagreb organized by the Croatian Medical Physics Association. 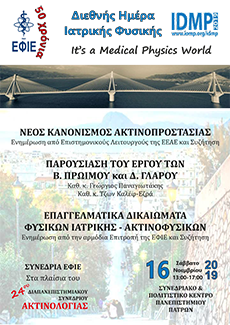 The International Day of Medical Physics 2019 will be celebrated this year in Thessaloniki, North Greece and Patras, Peloponnese. The first activity will be a workshop on the 'use of Lasers in Medicine - Clinical applications and Safe use', organised as part of the events that are scheduled for the celebration of the IDMP2019. The second one will be an event where the evolving role of the Medical Physicists and the professional rights will be discussed in the light of the new EU directive. During this day, Professor George Panayiotakis and Professor John Kalef-Ezra would present the great work in all areas of Medical Physics and Radiation Protection in Greece, which the late professors and pioneers Vasileios Proimos and Dimitrios Glaros have contributed. HAMP celebrates in 2019 its 50th anniversary, the “gold anniversary”.

In Dublin a Medical Physics Table Quiz in Doyle's Pub Phibsboro starting at 7pm on the 7th of November will be organised to celebrate the International Day of Medical Physics. 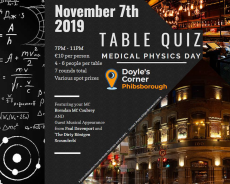 On the occasion of the International Day of  Medical Physics, the Italian Association of Medical Physics (AIFM) will organize a national meeting to be held on November 7th and 8th, 2019.

This high-profile, two-day event will take place in the city of Matera the European Capital of Culture 2019. The scientific program will be dedicated to the new challenges of medical physics, playing an important role as a bridge between innovation and medicine. Experts from all over Italy and abroad will gather in Matera to discuss the most topical themes related to the profession of medical physicist. As usual, the IDMP event organized by AIFM will also be an important chance to make the role and  daily work of medical physicists, known  to a wider audience. With this in mind, the next event has been included in the official event calendar of Matera European Capital of Culture, thus granting a higher media visibility.

A conference & workshop will be held on the 7-9th of November. The mission of the “Medical Physics in the Baltic States 2019” Conference is to consolidate the efforts of engineers, physicians and scientists working in hospitals, clinics, research and education institutions and companies from different countries for solving and discussing health care problems related with radiation therapy, diagnostics, imaging, medical and technological information, nanomedicine, biomedical engineering, radiation protection and education & training of medical physicists.

EFOMP president Marco Brambilla will attend the celebration and give a welcome address. 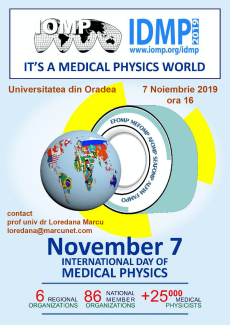 Since 2013, alongside EFOMP and IOMP, The Romanian College of Medical Physicists (CFMR) together with the Department of Physics from the University of Oradea are celebrating IDMP via a symposium dedicated to the medical physics profession.

This year, as in all the previous years, we expect a large number of participants, including high school students, science teachers, medical physics students and professionals. Throughout the years our focus was to promote medical physics as a field of science and a possible career path among the young generations, closely collaborating with science teachers. The poster and oral presentations presented at our symposium are all along the theme of IDMP, which this year concentrates on the multinational collaborations and the interdisciplinary nature of medical physics: “It’s a medical physics world”. Indeed, it is! 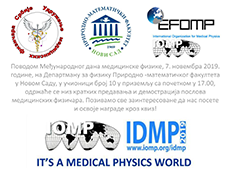 IPEM has done a number of activities, events and campaigns over the years. This year a joint letter with RCR and SCoR wil be written to the CEOs of the hospitals with radiology and medical physics departments advising them of this International Day of Medical Physics and the International Day of Radiology, which is on the 8th November. The letter highlights the importance of medical physics and radiology and suggests that this might be an opportunity to visit the department. 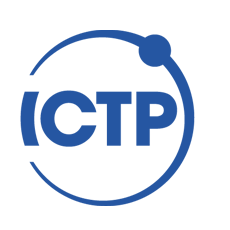 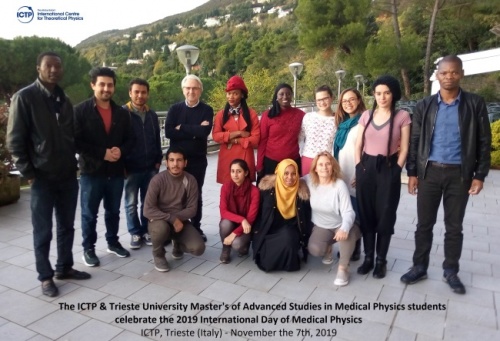 The Students of the first year of the Master's of Advanced Studies in Medical Physics, jointly organised by the ICTP and Trieste University, celebrate the 2019 International Day of Medical Physics

November 7th 2017 has marked the150th anniversary of the birth of Marie Sklodowska Curie. EJMP celebrated the occasion by publishing a special Virtual Issue which looks back at her remarkable career and the impacts she has had on modern science.

Marie Curie was the co-discoverer (with Pierre Curie and Henri Becquerel) of the new elements polonium and radium, and one of a handful of scientists who ushered in the birth of nuclear science at the turn of the 20th century. During her lifetime, she was rewarded for these accomplishments in basic science with two Nobel Prizes; the first in physics in 1903 and the second in chemistry in 1911. These contributions were matched by her accomplishments and leadership in applied radiation sciences. She can be considered the founder of the disciplines of radiochemistry and radiologic technology, and one of the world’s first medical physicists. Her example has inspired multiple generations of women, many of whom have made major contributions to the physical and health sciences.