Celebrating the 40th Anniversary of EFOMP 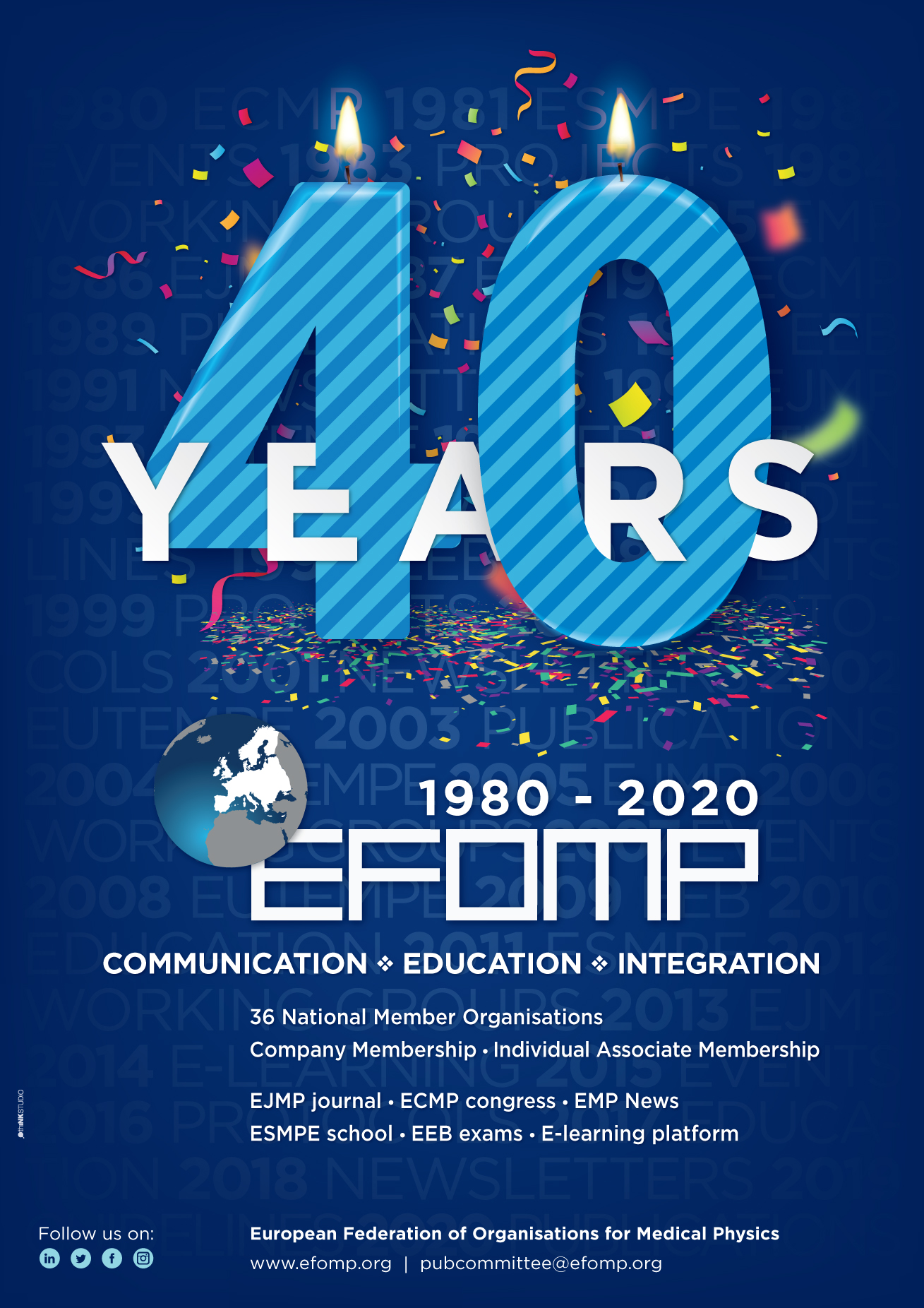 2020 marks the 40th anniversary of the foundation of EFOMP!

Throughout the year we will be celebrating with online events, activities and articles EFOMP@40.

We decided to kick off the celebrations by holding a “Birthday Cake competition”, in which our Medical Physicists (and their families) were invited to bake and decorate a cake, then submit photos of their creations by the closing date of 17th May, 24:00 CET; all the entries were shared on EFOMP’s social media. The best looking cakes were featured in the Summer edition of the European Medical Physics News, the EFOMP newsletter.

The rounds of the EMPNews photo contest will also continue throughout the year. The reward for the best three photos is their publication in the corresponding issue of EMP News in a high quality graphical section, together with information about the author. Winning photos are also published on EFOMP webpage and shared via social media.

3rd round:  “It Happened in the Spring”. Sping edition of EMPNews

EMP News invites all medical physicists to write a Haiku and participate in this contest.
The Haiku is a popular Japanese verse form in which deep thoughts may be expressed in just 3 lines and 17 syllables. The first line has 5, the middle one 7 and the last one again 5 syllables. It is as easy as this, and still it is intriguing. Contest. Deadline: 15th October 2020

During the pandemic period, April-October 2020, “Lockdown webinars” were organised by EFOMP and the Irish Association of Medical Physicists (IAPM) with contributions from EFOMP National Member Organisations (Sweden, UK, Germany, The Netherlands).

All webinars are accessible via EFOMP's e-learning platform

A series of EFOMP-EUTEMPE webinars will be organised during 2020-2021. The webinars will be followed two weeks later by a more in-depth, high quality EUTEMPE online Masterclass with a broader range of didactical methods for a deeper understanding of the content.

All webinars are accessible via EFOMP's e-learning platform

Eight EFOMP Past-Presidents have written fascinating articles about their time in office, beginning with EFOMP’s very first President, Professor John Clifton, and covering the complete span of EFOMP’s four-decade existence. To conclude the set of presidential articles, Marco Brambilla writes about his three years as EFOMP’s current President, while Vice-President Paddy Gilligan tells us what he has in mind for his upcoming presidency. Unfortunately there is also a sad note, since EFOMP’s second President, Professor Jean Chavaudra, passed away in April; in this issue you can read an obituary of this outstanding medical physicist. EMPNews Autumn 2020

A new programme “Mentoring in Research” has been launched in 2020 which aims at supporting earlycareer Medical Physicists (MPs) who want to set up a research project. It is about mentors helping mentees who have little access to research resources.  The programme aims at establishing high-level exchanges to foster the per-sonal development of the mentee. Mentees will be advised by an experienced professional, able to help young medical physicists to “see the forest for the trees” in the land of Research, or even better, helping to see “the bigger picture or broader situation”, i.e. the context of the research idea or innovation.

It took just twenty-seven months from the first initiative, by the Council of the Hospital Physicists' Association (H.P.A.) in February 1978, to reach agreement on the formation of the European Federation of Organisations for Medical Physics. Twelve months of correspondence was followed by an initial meeting in London in May 1979 at which organisations from fifteen countries were represented. At that meeting it was unanimously agreed to establish a Federation. A Steering Committee under the Chairmanship of Professor J.S. Orr was set up to draw up a draft constitution and working parties were formed to consider professional matters, education and training and publications. The draft constitution of the proposed Federation was circulated to all interested national organisations and at a second meeting held in London, from 7th-9th May 1980, the constitution was formally accepted by delegates representing .the medical physics organisations of fourteen countries, who thus became the founder members of the Federation. Delegates from several organisations who at that time had not approved the proposed constitution were able to express the wish of their respective organisation to join the Federation at an early date.

Such rapid progress, brought about by the commitment of the national organisations involved and their willingness to work together, augurs well for the future of our Federation. But let no-one think that having formed a Federation there is no more work to be done - our labours have only just begun. The success of the Federation and its ability to represent and advance the profession of medical physics throughout Europe will depend entirely on the effort that both national organisations and individuals are prepared to make. John S.Clifton, 1st President of EFOMP,  EMP News December 1980